I count myself lucky in this first round of blogging on T.S. Eliot’s “Four Quartets” to be writing about the fourth section of the first poem in the series, “Burnt Norton.” Why?  It’s the shortest section—just ten lines!  But that’s not the only reason.  In fact, the fourth sections of each of the “Four Quartets” are all quite short, mostly rhymed, and in more or less “regular” poetic form.  Each is very much like the minuet or scherzo movement in a string quartet–that lighter, shorter passage which prepares the audience for the big finale.  This little section four, then, is a transition, a bridging passage, perhaps pointing to a way forward.

Time and the bell have buried the day,
The black cloud carries the sun away.

Eliot writes of an ordinary event, the close of the day, as if it were a death and a funeral, but in lines that are almost light-hearted, sing-song.  To give a bit of context, in the immediately preceding section, Eliot has described the physical world and the world of the soul as grim indeed.

Both here and in his most famous poem, “The Wasteland” (published in 1922), Eliot is particularly attuned to emptiness, absence, dried-out-ness and aridity, as describing both the bodily and spiritual condition of his culture during the inter-war years.  But back to section four: at the end of the day, Eliot wonders if the natural world will recognize and interact with humanity, even give us deference:

Will the sunflower turn to us, will the clematis
Stray down, bend to us; tendril and spray
Clutch and cling?

We are in a garden, a fallen Garden of Eden, but one where the old dream of unfallen humanity’s supremacy over nature flickers briefly in that question.  Does nature even care for us?  Do we feel that we have a place in nature any more?  An answer seems to come from nature:

… After the kingfisher’s wing
Has answered light to light, and is silent, the light is still
At the still point of the turning world. 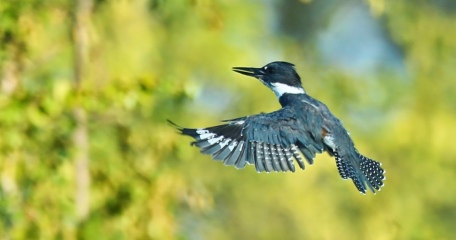 A bird’s wing has flashed in the dying sunlight and, silently, has sent a kind of signal back to the ground, perhaps affirming the ascendancy of light over dark, or at least a promise that, though the day is ending, light will come again tomorrow when sun-light will again mark the dividing line between darkness and light.  At the close of this section Eliot quietly, elegantly, evokes a moment of almost magical equipoise: “…the light is still [“ever,” “in an ongoing way”] At the still [“motionless,” “at rest”] point of the turning [“rotating,” moving, not at rest] world.”  The interplay of motion and rest of course permeates the entire “Four Quartets,” but this is single quiet moment of rest and balance…at the end of the day.

As I suggested above, “Burnt Norton” (1936) is a product of the years between the awful slaughter of World War I and the even greater devastation of World War II, with a world-wide Great Depression thrown into the middle for good measure.  Modern (Western, European) civilization was knocked back on its heels.  People were suffering; the economy, governments, and institutions were weak, drained of power, unable to bring about improvement and transformation in people’s lives.  This is the world Eliot writes out of and portrays in “Burnt Norton.” We could take the poem’s quest for “stillness” as a Lenten goal for ourselves, as we take this time to deeply assess our “spiritual position” and come (we hope) to a revitalized sense of our Christian faith.

But Lent is a journey as much as it is a pause.  In Lent we take a yearly spiritual journey from renunciation and self-examination to transformation and resurrection. If all goes well, this journey should embody movement and a moving forward—in contrast to Eliot’s near-obsession with identifying and explaining the “one still moment” that holds all moments, past, present, and future in one. In our worship service at Dutch Neck on the first Sunday of this month, we recited for the Call to Worship a litany that presents a different vision:

Moving is living, becoming something different, perhaps something new; perhaps advancing, perhaps sliding back, but always seeking.  In “Four Quartets” Eliot too is seeking, and his vision serves as a fruitful contrast to Lent—and life—as journey.