In Movement II of “East Coker,” Eliot gets rid of three things he (and maybe we) depend on for our sense of things: nature, creative expression (in his case, poetry), and wisdom itself. This triple rejection, tearing down the scaffold of our self-deceptions, strikes me as very frightening, very brave (especially for a poet), and very Lenten.

First, consider how much time separates “East Coker” from the first of the Quartets, “Burnt Norton.”

“Norton” first appeared at the back of a collection of Eliot’s poetry published in 1936. “Coker” appeared in 1940. A lot came in between. As in World War Two. As in Hitler’s invasion of Poland, the Blitzkrieg, Britain joining the war (in September 1939, the occasion of W.H. Auden’s indelible poem), the French capitulation, the resignation of Neville Chamberlain, Dunkirk (see the movie), and the Battle of Britain, the bombing of both industrial and civilian targets that began in May 1940, three months and change before “East Coker” appeared.

And Eliot had been feeling very dissatisfied with his poetry. “East Coker” was a way, he later said, to restart his poetry, see whether he could even write it again. Depression, terror, the black turn of history – against these threats to self, country, and human race, he set the continuance of his mystical Quartets.

Movement II of “East Coker” concerns poetry itself, and the writing of it, and how this fails, and whether it’s even worth doing anymore, for Eliot or for anyone.

One great example comes after a lyrical, beautiful passage that begins Movement II of “East Coker.”

One of the many mystical things about the Quartets is how, accordionlike, or heart-like, the poem physically appears to swell and contract, alternating sections of very long lines with other sections of shorter, compressed lyric poetry. The subject, at least at first, is nature – the notion that it’s November, yet the seasons seem to be mixed up:

What is the late November doing
With the disturbance of the spring
And creatures of the summer heat,
And snowdrops writhing under feet
And hollyhocks that aim too high
Red into grey and tumble down
Late roses filled with early snow?
Thunder rolled by the rolling stars
Simulates triumphal cars
Deployed in constellated wars
Scorpion fights against the sun
Until the Sun and Moon go down
Comets weep and Leonids fly
Hunt the heavens and the plains
Whirled in a vortex that shall bring
The world to that destructive fire
Which burns before the ice-cap reigns

Yeah, what is November doing? It seems to be noodling with spring and summer. Flowers and trees bloom at a time of year when they have no right to. Roses bloom late, and early snow falls on them. 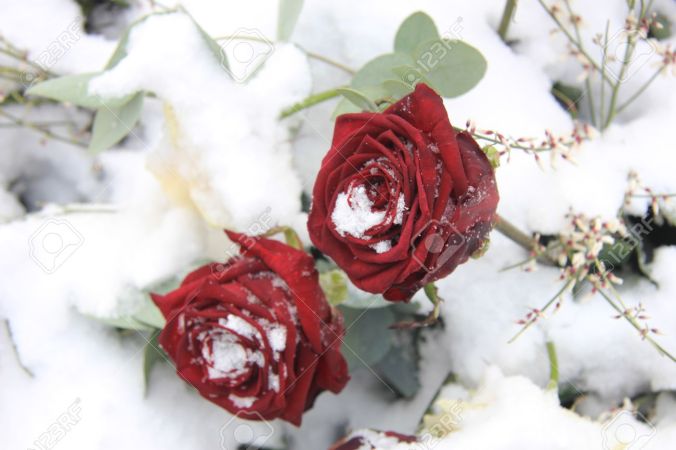 Seasons overlap, blend, blur. And look at that: thunder-snow! Maybe its first-ever appearance. You may recall the Snowpocalyse of January-February 2015, when thunder-snow was heard up and down the East Coast during a great blizzard, giving the bizarre impression of nature in disorder. Which is what Eliot sees around him.

Sure, the Leonid meteor shower belongs in November, as does the Scorpion, darkest sign of the Zodiac. But they get whirled, with all the weird, out-of-place stuff happening in nature, into a vortex foretelling the fire of the end times.

All written in lovely four-beat lines in an irregular rhyming scheme. And then we get

That was a way of putting it — not very satisfactory

That gesture may reminds us of Beethoven in the final movement of the Ninth Symphony. The orchestra repeats themes from the preceding movements, and one by one, they seem to be rejected, set aside. We’re looking for something greater, something ecstatic … and then the “Ode to Joy.” And Eliot, for some of the same reasons – to tear away the scaffolds and reveal the source of ecstatic union – is about to whip the rug out from under us.

These are five pretty glum lines:

That was a way of putting it — not very satisfactory
A periphrastic study in a worn-out poetical fashion,
Leaving one still with the intolerable wrestle
With words and meanings. The poetry does not matter
It was not (to start again) what one had expected.

Lenten indeed. The “intolerable wrestle/ With words and meanings” is the great struggle facing Eliot, and it resembles the struggling facing us all, every day, but especially during Lent: to do something that makes a difference. And to read even T.S. Eliot writing that “The poetry does not matter” is absolutely stunning. Stunning, further, to see him saying that the experience of creation “was not (to start again) what one had expected.”

And it isn’t, is it? As expected, I mean. The lyric passage on mixed-up November seems more rightly a passage about our own disorder, out-of-placeness, our own late roses covered in early snow. And this attempt at metaphor is, the poet decides, “not very satisfactory.”

Wrestling … intolerably … and coming up with nothing. Not very satisfactory. As we will often feel with the things we undertake during Lent. Does it matter if I pray more, meditate more, visit the sick, do community service, give up cigarettes or chocolate? What about this sick emptiness it all leaves? Where is it getting me? Why do I feel it’s getting me nowhere?

Eliot, a man much acquainted with that emptiness, leads us to see that poetry, and the wisdom (that is supposed to come) within it, doesn’t really get us where the Quartets want to go: to the “still point of the turning world.” We can note the disorder in nature and in ourselves in poetry as beautiful as you want, but the task still remains, to get to that quiet, motionless, actionless, even (intensely) thoughtless state where unity with the Incarnation awaits.

What we call wisdom, the good stuff, the reward of experience, age, reason, science, or even reading … it’s bunk. Eliot was 52 when “East Coker” appeared, and he had been feeling like an old man for a long time already. And he wants us to know, there’s no wisdom in being old:

What was to be the value of the long looked forward to,
Long hope for calm, the autumnal serenity
And the wisdom of age? Had they deceived us
Or deceived themselves, the quiet-voiced elders,
bequeathing us merely a receipt for deceit? …
There is, it seems to us,
At best, only a limited value
In the knowledge derived from experience.

Wisdom as we often think of it, the smart thinking and factual correctness about life, often taken as the property of geniuses and old folks, leaders, and successful people … it’s a mirage. It imposes patterns of thinking that are obviously harmful, and most surprising, obviously out of tune with this universe we live in. The way the universe really is,

the pattern is new in every moment
And every moment is a new and shocking
Valuation of all we have been.

That’s a Lenten stroke. Eliot nods to the perpetual freshness of the real … but also reminds us that that very freshness indicts us, in “a new and shocking/ Valuation” of our own staleness, “all we have been.”

Wow. What is there, then?

The only wisdom we can hope to acquire
Is the wisdom of humility: humility is endless.

The houses are all gone under the sea.

The dancers are all gone under the hill.

We are dust and will return to dust. Nature, poetry, wisdom – all dust. All the houses we see around us are “under the sea.” The dancers, of whom we had that lovely vision in Movement I, they’re gone. And we will be, too. You can be the music while the music lasts, but the music doesn’t last.

Humility is indeed “endless”: we need to see ourselves, and the world to which we are so attached, as nothing. Every fiber of us fights against this wisdom, this intolerable fight, but we have to embrace it. And that is impossible, and that is our task. Humility, true, cosmic humility, may help get us where poetry and wisdom fall flat, where the glories of nature get mixed up and mashed together. To embrace humility is to step out of the lostness, the brokenness, that is our deepest possession. It can help us step out of time toward stillness.