The Four Quartets is quite an outdoors poem. We have seascapes, country hamlets, bombed-out city scenes, gardens. Sometimes these are themselves, and much more often, maybe always, they reasonate with spiritual states. In The Waste Land, that unforgettably dreary, painful beginning,

April is the cruellest month, breeding
Lilacs out of the dead land, mixing
Memory and desire, stirring
Dull roots with spring rain.

signals a dreary spiritual emptiness. In “Burnt Norton,” the path to the garden is a path to memory, and also a path to a different spiritual state. And throughout the Quartets runs the theme of the “way,” beginning with the opening quotes from Herakleitos: “the way up and the way down are the same,” meaning “the way there and the way back are the same.” The Greek word hodos, which translates as “way,” sometimes also means “path,” and in the Quartets we find ourselves often walking outdoors, on many paths, amid the different landscapes of our interior being. Lent, too, is a pathway, a journey, involving both our physical lives – where we’re going, what we’re doing, thinking about, even eating and drinking – and our interior lives, the quiet room we share only with God, the room with the door shut. Exterior is interior.

We are journeying through a world pervaded by an Incarnation we can see only fitfully, and so another journey faces us always, a journey, geographically speaking, to nowhere, involving the traverse of no distance, yet a journey nevertheless. In “Dry Salvages,” we focus on the voyage, and thus our central landscapes, spiritual and actual, are of the river and the sea.

In Movement I,” we’re told that the Dry Salvages are three rocks off the coast of St. Ann, Massachusetts. They’re treacherous, those three; there’s more beneath the surface than meets the eye, and those rocks have hosted several spectacular shipwrecks. In a few lines, Eliot will write of “The menace and caress of wave that breaks on water/ The distant rote in the granite teeth/ And the wailing warning from the approaching headland.” We are, not to joke too much, in ambiguous, perilous waters.

The beginning of Movement I is a muscular, Whitman-like ode to rivers everywhere:

I do not know much about gods; but I think that the river
Is a strong brown god – sullen, untamed and intractable,
Patient to some degree, at first recognized as a frontier;
Useful, untrustworthy, as a conveyor of commerce;
Then only a problem confronting the builder of bridges.
The problem once solved, the brown god is almost forgotten
By the dwellers in cities – ever, however, implacable.
Keeping his seasons and rages, destroyer, reminder
Of what men choose to forget. Unhonored, unpropitiated
By worshippers of the machine, but waiting, watching and waiting.
His rhythm was present in the nursery bedroom,
In the rank ailanthus of the April dooryard,
In the smell of grapes on the autumn table,
And the evening circle in the winter gaslight.

I can’t be the only person who has ever paired this beautiful, lucid passage with Langston Hughes’ lovely “The Negro Speaks of Rivers”:

I’ve known rivers ancient as the world and older than the
flow of human blood in human veins.

In “Dry Salvages” we begin with a capsule history of the relationship between river (as god) and the history of civilization. Once we “solve” the “problem” of the god through technology, build a bridge over the river, we choose to forget the god. 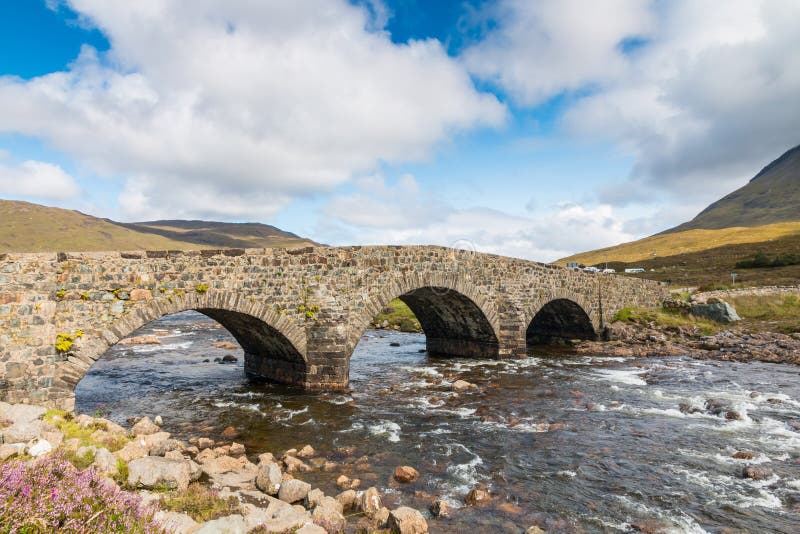 But the point is, it doesn’t matter if we choose to forget the god. The god is “implacable.” The god’s rhythms are always already within us, in spring, in the flowers we plant in the garden, in fall, in the grapes we eat, and even in the way we tame fire and bring it inside for warmth in winter. We live indoors, but never all the way. Our domestic technological lives consist largely of bringing the outdoors inside, “taming” the outdoors, or so we think. Eliot reminds us that the god, the river, the Incarnation, “His rhythm,” are always inside us.

And now here comes another way to explore this idea. The next line after this expansive, wonderful passage is

The river is within us; the sea is all about us

There’s a great Italo Calvino story about how the constitution of our blood actually, to some degree, approximates the saline balance of seawater. Our blood is, in evolutionary terms, a kind of “nostalgia” for our ocean origins. And we carry that within us, always. We are mostly water. Our bodies, in the way they’re made up, are literally, factually, river and ocean. We say we have tamed these things, and in some ways (bridges over rivers; boats over the ocean) we have. On the other hand, they make up most of us. They never leave us, and we can never leave them. The rhythm of the god is always in us, always us.

That could be why it’s so hard for some people to “see God,” as the phrase goes. God and the Incarnation pervade and permeate us and everything. They are the conditions of our possibility. They are not only the “building blocks” of our bodies and souls; they are also those very bodies and souls. Like anything that is so matter-of-course, these become part of our landscapes. They become invisible. And because we are fallen, it’s hard to find them. We have to go on quite a journey to get back to where we once belonged, as the Beatles once sang.

Our blindness derives, for Eliot, directly from our fallenness. We forget. We think we’ve “solved” the “problem,” when the problem is us, our alienation from our divine ground. A lot of work faces us if that’s where we want to get.

Mysticism is the belief that you can be directly in touch with the divine. And Eliot, with these two literally oceanic metaphors – river and ocean – is facing us with the most powerfully mystical challenge you’ll ever get, the challenge of acknowledging that we are always in touch, always pervaded. If so, then we have a problem. We are also fallen, riddled with error. We are “unhealthy souls,” and so we are blind and fitful. It’s going to be hard for us to recover our divine ground.

There is an ominous side. It literally does not matter what we choose to forget. God is “implacable,” God is “a reminder/ Of what men choose to forget.” And God may not be the God we want, the God we would design if asked. This God is, among other things, a “destroyer,” recalling Shiva of the Bhagavad-Gita. We eat this God in the grape and are warmed by this God in the winter gas fire. Recalling the Dry Salvages, this God is the rocks beneath the waves.

And then the poem takes us to sea. So much of this passage is so beautiful, you can almost smell that sulfurous, briny sea smell.

The sea is the land’s edge, also, the granite
Into which it reaches, the beaches where it tosses
Its hints of earlier and other creation:
The starfish, the horseshoe crab, the whale’s backbone;
The pools where it offers to our curiosity
The more delicate algae and the sea anemone.
It tosses up our losses, the torn seine,
The shattered lobsterpot, the broken oar
And the gear of foreign dead men.

The sea is the sea of creation, washing up evidence of “earlier and other” creatures. It also washes up “our losses,” sea-wrack, torn nets, the broken oar. The sea is both, again like Shiva, creation and destruction.

There’s a buoy out there, one that marks its place by a bell that rings as the buoy is rocked by the action of the waves. And we come to a very mystical moment, the “ground swell”:

And under the oppression of the silent fog
The tolling bell
Measures time not our time, rung by the unhurried
Ground swell, a time
Older than the time of chronometers, older
Than time counted by anxious worried women
Lying awake, calculating the future,
Between midnight and dawn, when the past is all deception,
The future futureless, before the morning watch,
When time stops and time is never ending;
And the ground swell, that is and was from the beginning,
Clangs
The bell.

A groundswell is an uprising of a large section of ocean as one. The sea rises, the buoy bell clangs. But somehow, we’re both experiencing that (a buoy in a place in the sea) and experiencing another groundswell, another bell (which is nowhere, which is everywhere). This is the uprising in all things, the rhythm of the god, now here in the creating, treacherous ocean, rising and tolling, measuring “time not our time,” tolling the timeless. We’re back where the Quartets began, with the still point. Yes, we’re rising and falling with the sea, but we’re also at an understanding of “When time stops and time is never ending.” What tolls this bell is “the ground swell, that is and was from the beginning.” This ground swell is always rising, everywhere, in everything, and this bell is always tolling. For you and me.

That’s an echo of John Donne’s “Meditation XVII” from Devotions Upon Emergent Occasions. Donne, there, too, was thinking about unity, timelessness, how we are all one, and how one person’s death affects all others: “No man is an iland, intire of it selfe; every man is a peece of the Continent, a part of the maine … any man’s death diminishes me, because I am involved in Mankinde; And therefore never send to know for whom the bell tolls; It tolls for thee. … ”

Lent is a time to look at death directly, to ponder our personal end and the ends of those all around us. It sometimes is said that we cannot actually do this. We cannot actually accept that this will happen to us. Part of our brain is saying, “I’ll get out of this somehow,” while, meantime, everything else we see and know tells us we won’t. The fact of death permeates both Donne’s great meditation and Eliot’s Quartets, right down to the “broken oar” washed up on the beach, symbol of a former vigorous life, of technology, of a sailor working for a living against the sea and out of the sea, and an ultimate failure, to be washed up as sea-wrack. That “bell” is both the presence of the divine and the fact of our end.

Lent calls on us to accept both the divine, through and through us and our cosmos, and also our own mortality. It can make us love others better, out of compassion rather than pity, and it can make us embrace our fallenness. Eliot shows us a world full of beauties: flowers in the garden; strong, flowing rivers; the delicate algae and anemone in the tidal pools. This is accompanied by an undertow of mortality.

Wherever we are, whatever path we’re on, be it on land or on water, or in the quiet room with the door shut, we are on the way there, and the way back. Lent is a “lengthening” of days, a return of the sunlight of spring and summer. As we go forward, away from the darkness of winter (and brother, has it been awful of late), we are returning to the sun and to warmth. So Lent, a time of sorrow and penance, meditation on our end, our fallenness, our reality as dust, is also a time when hope can grow, day by difficult day. We have an end in view; “in my beginning is my end”; we have a place-that-is-noplace to get to. Eliot wants us to hear the ground swell, the bell clanging in a time that is no time, and be on our way. Later in “Dry Salvages,” he wishes us the best: