I’m a huge fan of the very controversial figure we meet in this movement of this fourth and final quartet in Eliot’s great poem: Dante. (Controversy? Well, we’ll get to that in a moment.)

We begin with a kind of verbal a descent, into what again we do not know, for what’s to come is introduced by rhyming poetry that seems suitable for the verse of a children’s book, although the subject is deadly serious: death itself. Or more precisely the process by which things die: the forces of the universe and of nature, not least of which is of course time itself, which are no match for our protestations against impermanence. It all goes to dust and ashes, whether that ash is the perfumed remnant of dead roses, or an old man’s stogie, easily brushed away from one’s starched sleeve. Like all those distinguished civil servants and chairman of many committees, they all go into the dark; all that was substantial is now dispersed in the air, or lost in “the parched eviscerate soil” gaping “…at the vanity of toil.”

The image of our well ordered rage against chaos–in the form of buildings once standing neatly proud and now dispersed to shrapnel and “metal leaves”–is fitting. Of a sudden we are now indeed in England, in a certain district of London to be precise, wandering the streets at night in a hellish scene of bombs and Messerschmitts buzzing through the air, making remnants of our hard-won sensicality, buildings reduced to rubble and tin shards like the dry leaves that once were the promise of spring and life and order. Eliot is writing from his experience now, as an air-raid warden whose job it was to patrol the streets of his district in London after an air raid, and we are left to imagine the scene he encountered on those jaunts.

And it’s within this scene of chaos and hell (or is it purgatory?) that the narrator (is it Eliot? Or a compound narrator?) who meets the eyes of “a familiar compound ghost” whom the narrator “had known, forgotten, half recalled / Both one and many.” A mysterious figure whose identity is less mysterious, at least in my opinion, when we come to a line just after: “And heard another’s voice cry: ‘What! are you here?'” 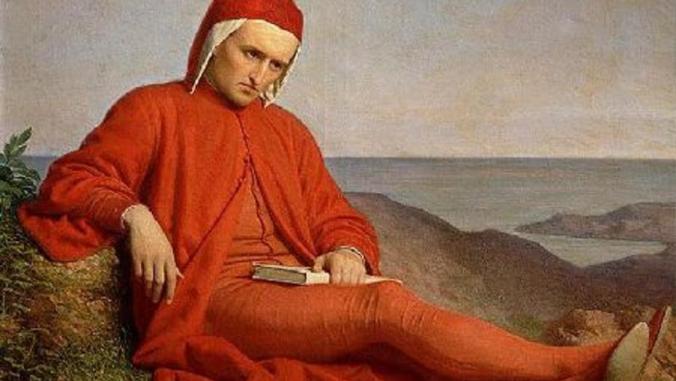 But…now to the controversy. Is the “compound ghost” Dante? Having done a bit of research, there are some commentators who are not convinced (although, I can’t see how that’s possible). If not Dante is it some composite of literary mentors that have influenced Eliot’s art, a sort of “ghost of poetry past.”

What seems obvious to me is that Eliot means both, Dante and Dante as a representative of the whole business of art. But larger than that, this figure seems to represent any enterprise that seeks to make a permanent mark on the world, to outflank death by the achievement of fame. To be immortal by being…remembered. Art as an immortality project. The line, “‘What! are you here?'” is a very direct and distinct reference to Dante–as if the surroundings were not enough of a clue. And here’s where we need to pay some careful attention to the echo-structure that Eliot is building, because what’s going on in the section of Dante’s poetry that Eliot is referring to echoes what’s going on in this section of Little Gidding.

In Inferno 15, Dante the pilgrim encounters his mentor, Brunetto Latini, in Circle 7, where the Sodomites are punished by being pelted with a rain of fire; or rather, little snowflakes of fire that fall like ash upon the souls tormented there (sound familiar?) Brunetto Latini is a surprising and enigmatic figure; it’s odd Dante puts him there since Latini was a mentor and something of a hero for Dante. In this scene Dante treats Brunetto Latini with great respect, and mentions his admiration for his literary work and his teaching.

And so perhaps we see the parallel: Dante meeting his master in hell; Eliot meeting his teacher, one whose words reached him through the vast distance of centuries, in his own literal hell. Dante, in a scene where flakes of fire rain down; Eliot, in a scene were fiery bombs pour from the skies.

But here’s where we have to admit the strangeness, and pondering it may be somewhat critical to understanding the subtlety here. Brunetto Latini is in hell. And he’s there for Sodomy? Why would Eliot situate his own hero (though a compound ghost he may be) in his own literal hell, as “the first-met stranger in the waning dusk,” in the place of Ser Latini? Well, it makes sense if we think of that particular sin, sodomy–and why it was considered a sin–with the medieval mindset of Dante. Sodomy is a crime because it is a use of passion that is unfruitful. It does not result in the very thing that sex (and one might say also passion) was meant for: to be creative of life. Sodomy is, in that medieval frame, a mis-placed passion. Some scholars think that the real crime of Brunetto was thinking of his art in such a way: as if art is the means to create one’s way into eternity. To think more of the passionate act than one should.

This is the delusion to which Dante is subject, and Dante’s words point to the sin, and the great temptation: “You taught me how man makes himself immortal” (Inferno XV.85) This is all about old men, looking back at their art, how significant it seemed at the time. How virtuous, how heroic. How one has used it to attain the adulation of one’s fellow artists. But now, to gaze at one’s achievement with

…the conscious impotence of rage
at human folly, and the laceration
Of laughter at what ceases to amuse.
And last, the rending pain of re-enactment
Of all that you have done, and been; the shame
Of motives late revealed, and the awareness
Of things ill done and done to others’ harm
Which once you took for exercise of virtue.
Then fools’ approval stings, and honour stains.

How this applies to Eliot is perhaps unclear, but more clear would be the indictment of our great Dante, settling scores with his poetry, putting his enemies (and sometimes friends) in hell, all in the name of justice and virtue. All of these humble and humbling insights now gained from the vantage point of age, from the now jaded poet (jaded…too strong a word?), who sees that one’s language is never going to be enough to be “remembered,” to be immortal, since each generation will need a new language, a new poetry that seeks to articulate the very same truth that everyone else has tried, and failed, to completely make clear with one’s art. Each generation’s artist will be about the attempt to “purify the language of the tribe.”

As I’ve read this section of Little Gidding, and that ancient Canto of Dante, the echoes are so very many, and subtle, and resounding. Just read them both together and you will see how the images play off of one another.

But this one in particular echoes most loudly: the image of Pentecost. What we have here is fire, a fire that is Brunetto Latini’s contrapasso, his punishment. We have the German bombs exploding and splitting Eliot’s current reality. But isn’t that what Pentecost is about? Might we see Brunetto’s punishment as a kind of failed pentecost: a fire that punishes, but fails to purify; what would happen if he were to hold still, and let it burn, and purify? As horrific as the cluster bombs were, their action is the same those tongues of fire that disturbed the reality–and excited the language–of those ancient apostles on that day when tongues of fire descended upon them.

This now the familiar cycle: we tried, and failed. But there is only the trying. There is only the naive hubris: that we are capable of making art that will stand the test of time and eternity: none can. And yet, we still fare forward, knowing that all attempts will ultimately fail. Save one. One not our own.